This page is for the Media for Interviews or Headline News Stories: 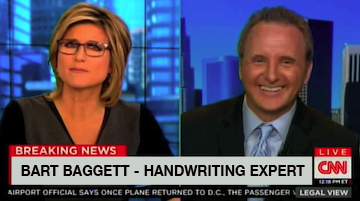 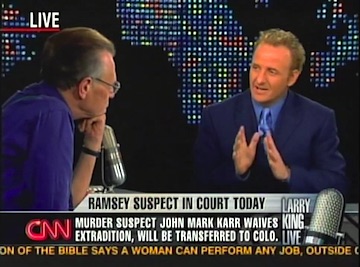 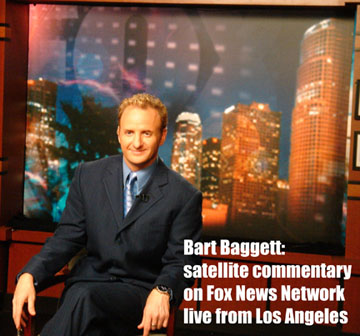 Book Bart Baggett now for your radio or TV Show. One of America’s best on-air talents.

Bart Baggett has appeared on hundreds of radio and TV shows over the past 2 decades.

Bart has commented on the nation’s leading criminal trials, forgery cases, and unsolved mysteries. He has appeared on over 1,500 radio / TV shows (CNN, Court TV, CNBC, etc). Mr. Baggett is the most TV and Media experienced handwriting expert in the world.

Why call anyone else and risk your segment or forensic case being legally wrong, technically sloppy, or boring?

Have Bart Baggett as a Guest on Your Show or as a feature in your next article. Full-length interviews available with handwriting samples and graphics emailed to you for an easy, visual, intriguing feature story. He has been the featured guest in the Wall Street Journal, USA Today, Biography Magazine, on Court TV, Fox News, CBS This Morning, Today Show, America’s Most Wanted, Treasure Detectives, and even on CNN’s Larry King Live. Bart Baggett Biography.

Bart Baggett has become much more than an internationally recognized handwriting expert and professional speaker. He has become an entrepreneur influencing the media world, publishing industry, legal decisions, and the community of thought leaders worldwide. Bart owns 4 businesses and even makes time to appear in feature films and scuba dive once or twice a year.

Bart is the Founder of The International School of Forensic Document Examination which trains and certifies handwriting students worldwide. He is also a highly sought-after professional speaker and talk-show guest. Bart is the author of 7 books including the Amazon #1 Best Seller Handwriting Analysis 101 and his 402-page self-help book: Success Secrets of the Rich & Happy – How to design your life with financial and emotional abundance.

Here is what radio and TV producers say about having Bart Baggett as your guest expert.

Bart will be making several more appearances on our show over the next year and I encourage you to consider him for those horribly slow days when listener response is nil and let him make your job easier. Feel free to call for verbal references.”Sincerely, Carmen Conners The Carmen and Chris Morning ShowWSSR-Star 95.7 Tampa Bay, FL (95-00)Now in Minn, MN (01-current)

“Bart has been a regular guest on our show since 1995. We always get phone calls faxes and great listener response! As guests are concerned, he is a sure thing!”-Jonathon Monk, The Monk & Kelly Show Las Vegas, NV KOOL FM"

Comments“We turned to OUR handwriting Expert.” CBS This Morning.”A great guest. The whole studio was in stitches. We will definitely have him back again.”– Lorraine Crook, Nashville, TN, Host – Crook and Chase Show

“Bart is hilarious and the handwriting thing is dead-on accurate. A wonderful guest.” — Bob, Host – The Bob and Tom Morning Show Syndicated Nationwide”

Bundle of energy, intelligent, and very funny! We received hundreds of faxes, and the listeners loved him.”— Greg Thunder, Host – KMPS-FM, Seattle

Here’s what they said: “You are the perfect guest.”– Mark Summers, Talk Show Host – The Biggers and Summers Show, Lifetime Television, NY